“It’s cool because you can look into the water or switch your eyes and look at the trees reflecting in the water,” notes O. as we sat side by side on a fallen branch in The Enchanted Forest this afternoon.  I looked in the direction of her gaze and saw instantly what she meant and remembered all the times I have noticed this for myself and tried to get someone else to appreciate it.  The water surrounding us glimmered gently a reddish brown of the thousands of fallen leaves that release their tannins into it while on the surface floated the ghosts of the trees above and around us.

While we sat discussing the curious qualities of water, four boys whooped and yelled not far away from us, clambering up onto the giant root-ball of an old tree and alternately sloshing about in the spring-cold water, ignoring the chill seeping into their rubber boots and even slinging snowballs in each other’s direction.  C. commented that the snowballs floated at first and then sunk as they absorbed the water.  I couldn’t help thinking of all the science concepts that kids inevitably learn out there without anyone telling them to.

E. and I.B. tend to stay a bit apart from the other boys, either seeking me out for discussion or exploring and discovering on their own, safely away from the splashing and dunking that the youngest boys can’t seem to help engaging in, despite the colder temperatures.  After announcing that he had discovered a way over to us without getting wet, I.B. appeared behind us a bit wetter than he’d intended but undaunted.

When we tired of sitting, O. and I.B. and I went off into imagination land, with O. taking the throne in a clear pose of snobbish dominance.  Playing along, I warned I.B. not to get too close to her and to approach the queen with respect.  He promptly marched up to her and said, “You smell!”  We announced that he would be punished for his impudence (something like, “Off with his head!”) and he swiftly amended his statement, saying, “Ahem, what I meant to say was, ‘You smell very nice!”  I cracked up. 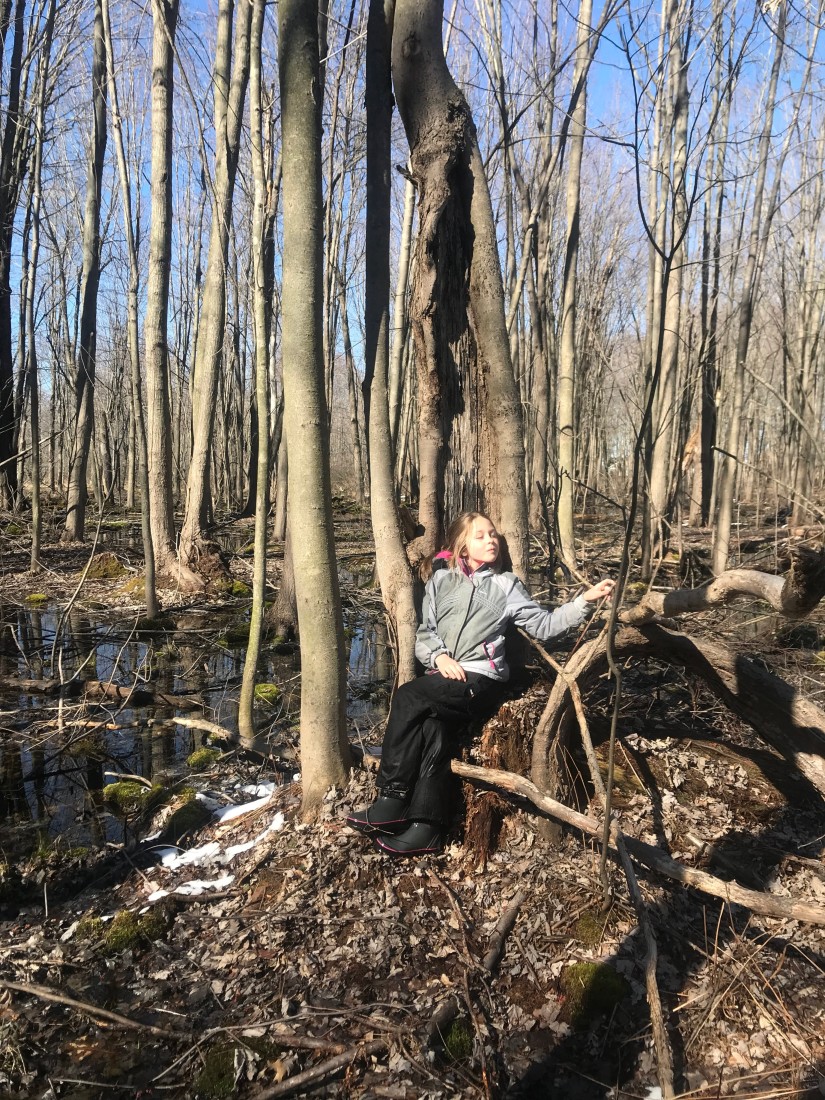 We went on exploring from there, hopping tiny moss islands and balance-walking along decomposing logs sunk almost below the water’s surface.  Keeping up a constant patter of pretend-play talk with regal sounding words and accents, we crossed The Enchanted Forest and “claimed” new lands for ourselves.  O. and I.B. kept me amused the entire time.

I didn’t take many pictures today.  It just felt like a relaxed sort of sun-soaking day, watching last night’s spring snow melt and wondering where the frogs and turtles were hiding out after having woken up already.  We hope the real spring returns for next week’s session.

p.s. Did you know that trees have senses too?  New research has shown that trees send out chemical and electrical signals.  They can communicate with each other within their own species and they often use fungi as their communication devices!  They can warn each other of destructive insects or hungry giraffes and either dissuade them by using bad-tasting chemicals in their leaves or by inviting predatory insects to come and eat the tree-harming insects!  Not only that, but these species of trees need each other to be healthy!  Despite having to share light, water, and space, trees actually do better when they have other trees of their kind than when they are alone.  It is just incredible!  Check out the book, The Hidden Life of Trees by Peter Wohlleben for more info.  A kids’ version that includes some of the same information is, The Magic & Mystery of Trees by Jen Green.  I shared a bit of this one with a few of the kids today.