Our last day of this particular group was a double session, morning as usual and then picnic lunch with families, followed by a chance for the kids to show off the woods to their parents and siblings.

On the way to the wetland I asked the kids to stop occasionally for some nature journaling.  While this isn’t something everyone will want to do, I wanted them to have the introduction to it as an option for future use.  We briefly focused on using only our sense of hearing and then writing and/or sketching what we noticed with it.  We also did some leaf rubbings, weather notations, and what we noticed when we looked UP occasionally.  G. made a rule for himself, which he shared with the rest of us, which was, “Stop walking to look!”  I will now rephrase that for the purposes of your comprehension… “In order to look at something properly, stop walking first.  Otherwise you will likely trip and fall.”  But in the context, everyone understood perfectly what he meant!

When we reached the Log Walking Area, I asked everyone to locate a Sit Spot of their very own, with enough space between everyone to allow for 10 minutes of silent observation with or without journaling.  They did a great job!  B. was able to watch a spider spinning her web.  L. captured a bug to observe in a container with a magnifier.  E. sat quietly looking up and all around seeming very content.  Everyone sat and everyone had something to share after we were done.

Z. and L. have some of the very coolest tools for nature observations.  During the picnic their mom helpfully shared that she has discovered no difference between more expensive versions and dollar store quality nature tools.  This is VERY good to know! 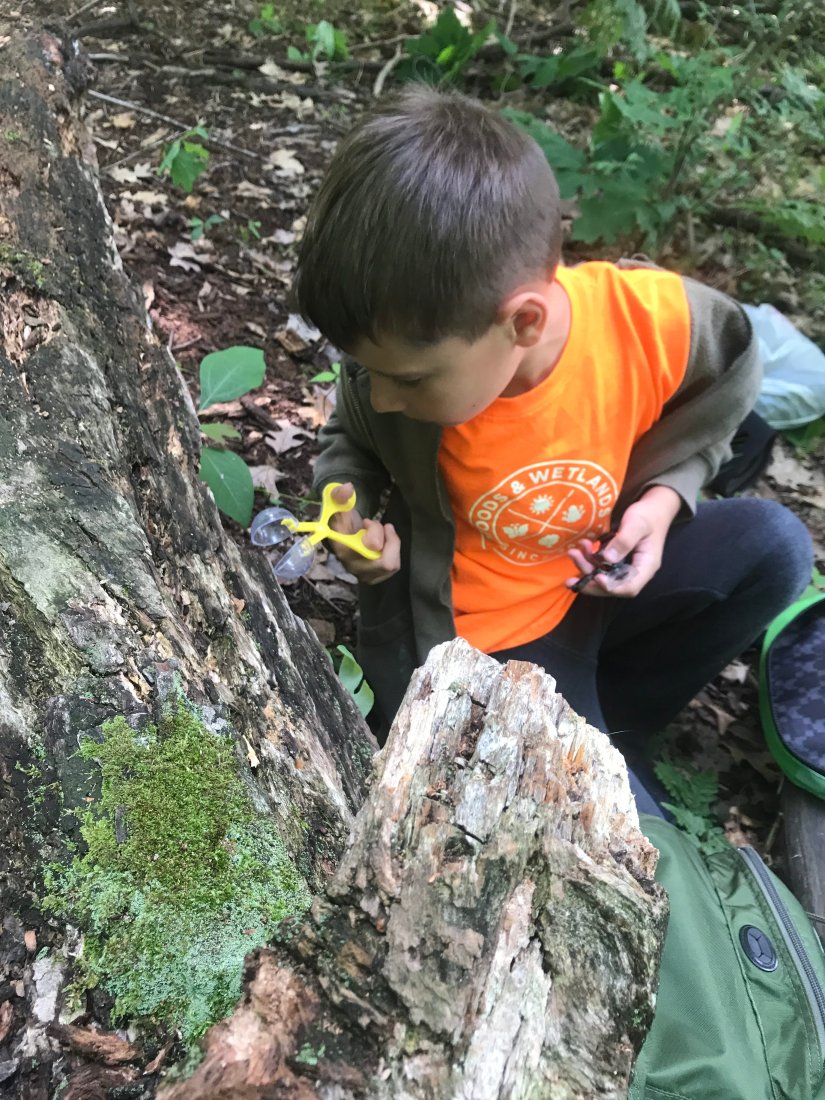 I love that Woods and Wetlands experiences provide opportunities for both individuality and collaboration.

Having mastered the hand grip for writing, I found myself now attempting to teach how to hold a pencil sideways for rubbing over the veins of a leaf.  It took some practice.

I appreciate how some kids keep at things, not giving up when it doesn’t look the way they want it to right away.  G. is one of those kids.  On this day he also attempted and succeeded in climbing a tree that he fell out of last week.  (Only from a low branch; no harm done!) This time he made it all the way up to the high point he was originally aiming for!  He was so proud of himself and his mom was there to witness it!  Here I must give some mom credit where it is clearly due.  Though her young child was risking injury as he worked and climbed with determination along that branch and then up high against the big tree trunk, she watched with every appearance of calm and relaxation.  If she felt any apprehension or fear for him, she didn’t let him see it.  My heart was full as I watched him climb and watched her demonstrate that she trusted him to do it, that she supported him in this process.  I know that parenting isn’t easy and letting go can be terrifying for parents.  Kids who feel trusted and who are allowed to try and take some risks, allowed to fail and learn, are well equipped to take on whatever life hands them. 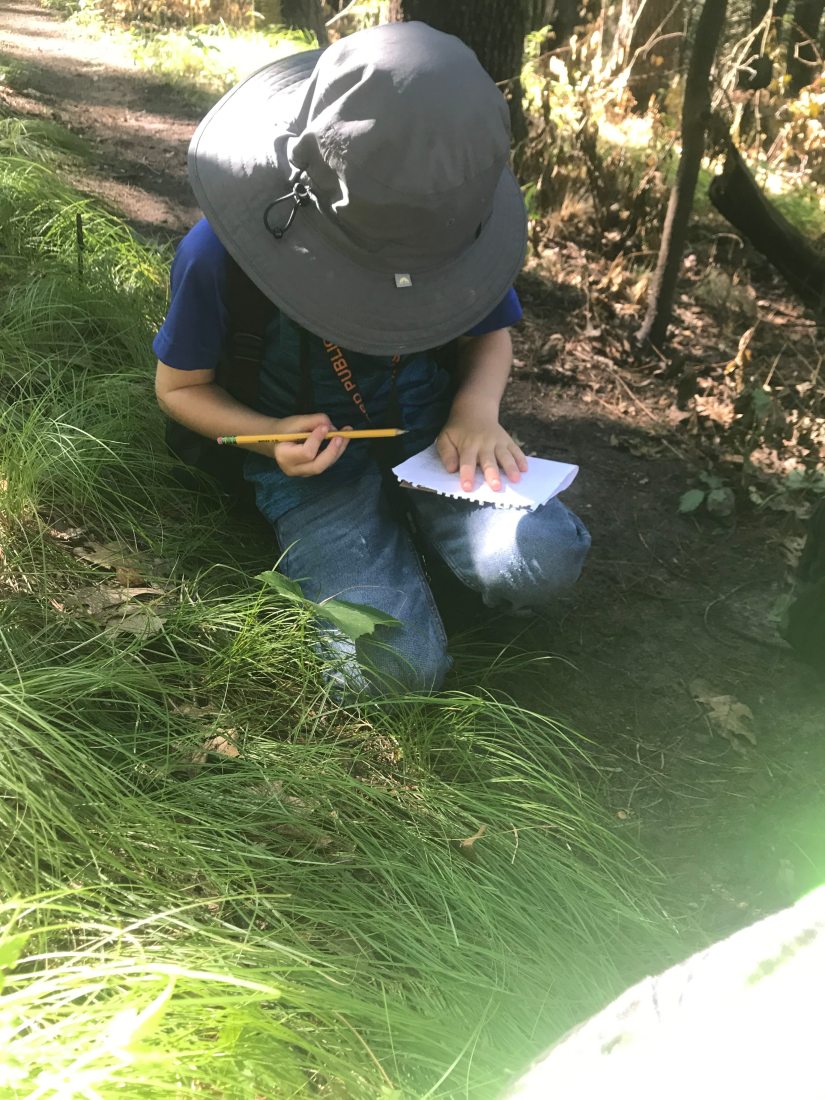 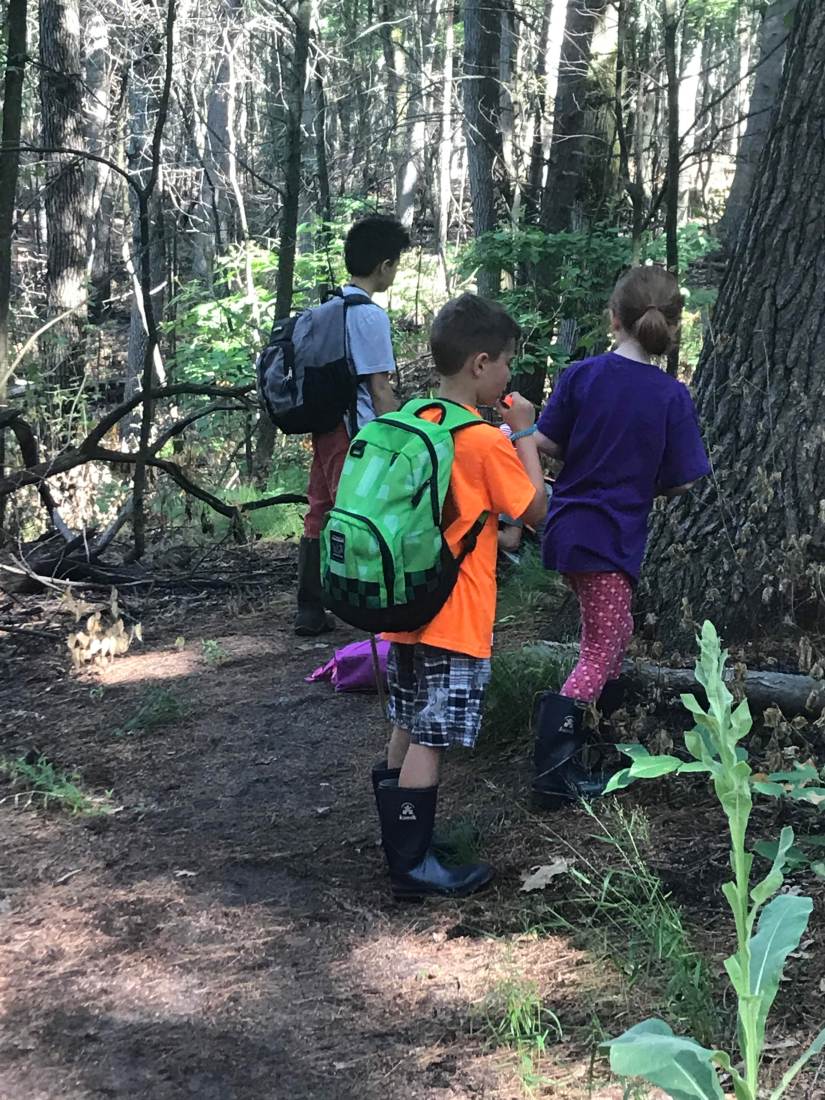 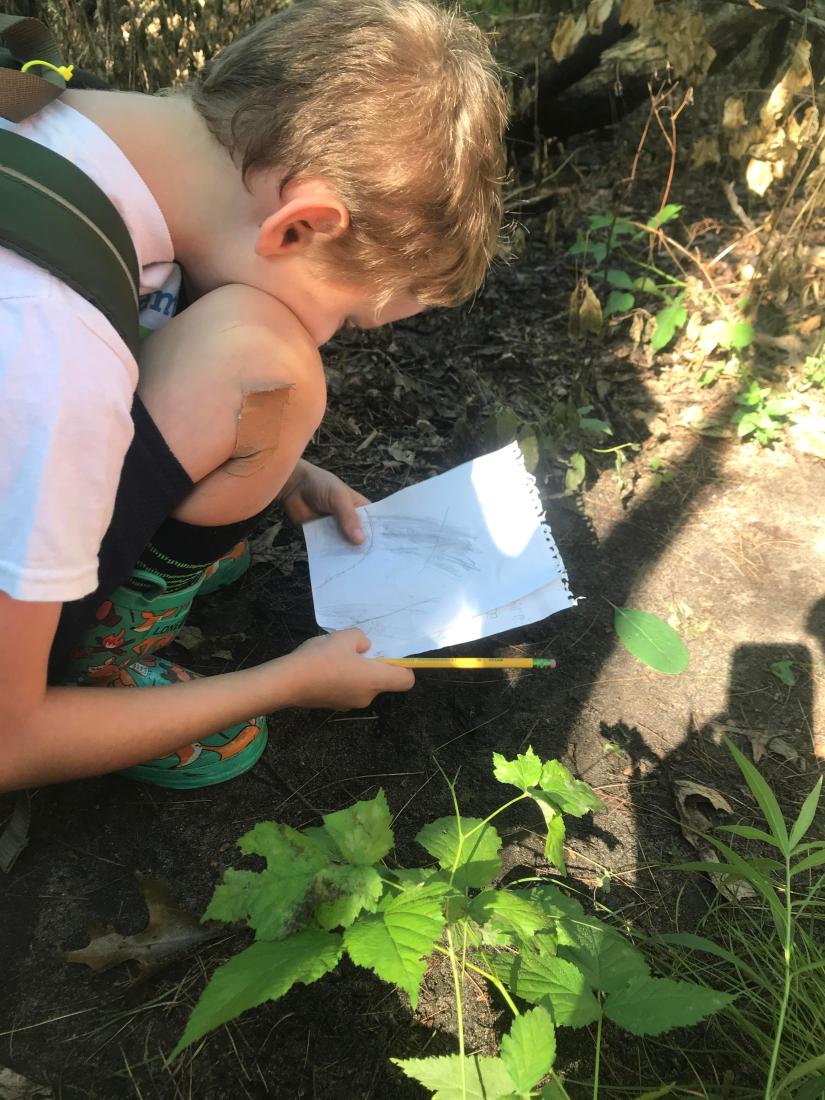 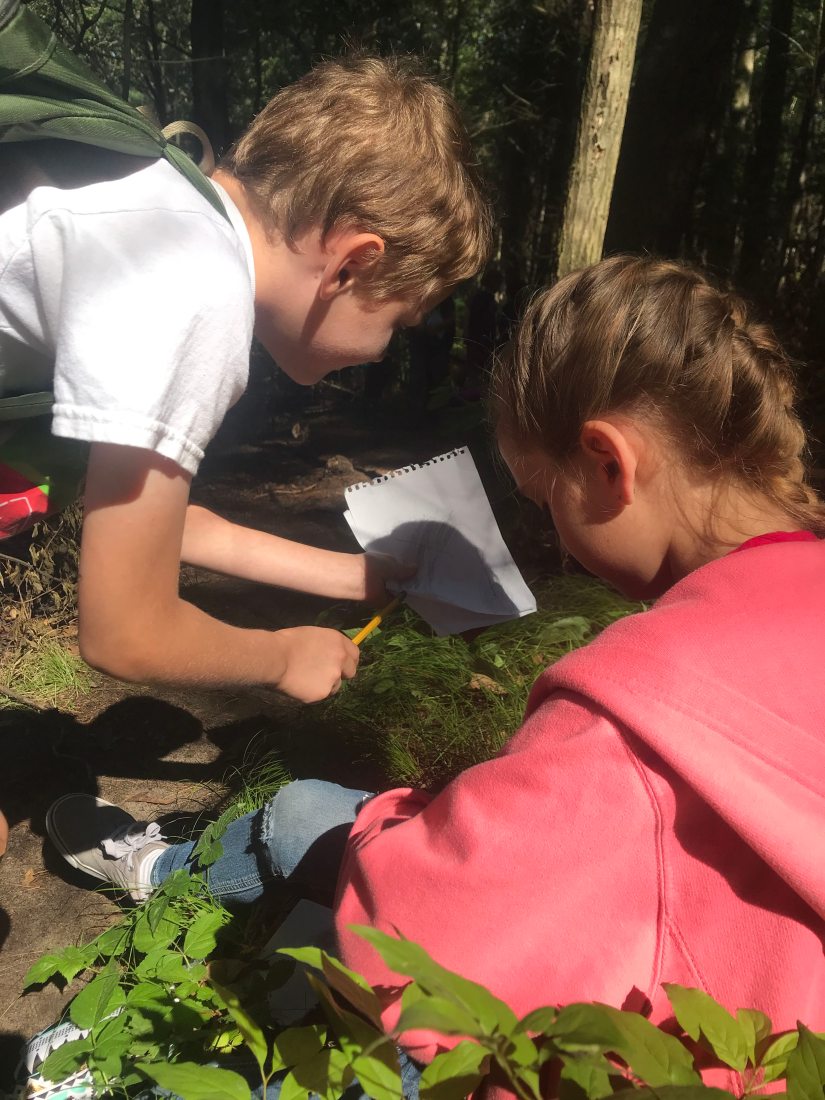 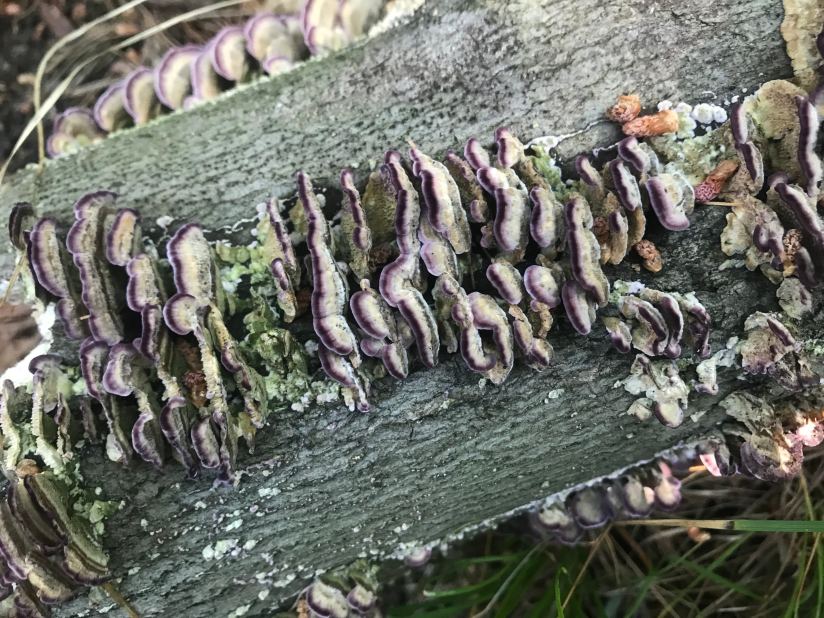 Somehow or other this knobby tree has escaped my attention in past years.  On this day it was recognized as potentially climbable.  We discovered that only the tallest of us could get very far, but it was like a rock-climbing wall, so I.B. named it, “The Rock Wall Tree.”  Some of the smaller kids wanted to be lifted up, but one of my safety rules is no lifting of anyone else.  That includes me.  I do not lift kids up into or onto anything. When they have grown tall enough and/or strong enough to do it themselves, then I know they are safe enough to try.  I also know they can get down if they got up.  I have, on very rare occasions, helped lift someone down if they were truly in a situation where they were slipping and would have fallen too far.

Do you see the toad?  L. noticed it first.  (She notices everything!)  B. asked to be the one to catch it, so the rest of us stood back and let him.  He was so gentle and patient about it.  I appreciated his approach.  Often, kids tend to lunge quickly and grab somewhat aggressively.  B. took his time and quietly followed the toad’s escape hops . He didn’t get frustrated or pounce on it.  When he finally had the toad cupped softly in his hands, the toad seemed okay with it and didn’t try immediately to escape.  We had a chance to enjoy looking at its beautiful, gold and black eyes and camouflaged bumps.  I reiterated that it is a myth that toads give us warts!  Just not true!

A fresh looking deer track in the driveway that bisects the nature preserve.

The Vine Playground never gets old! 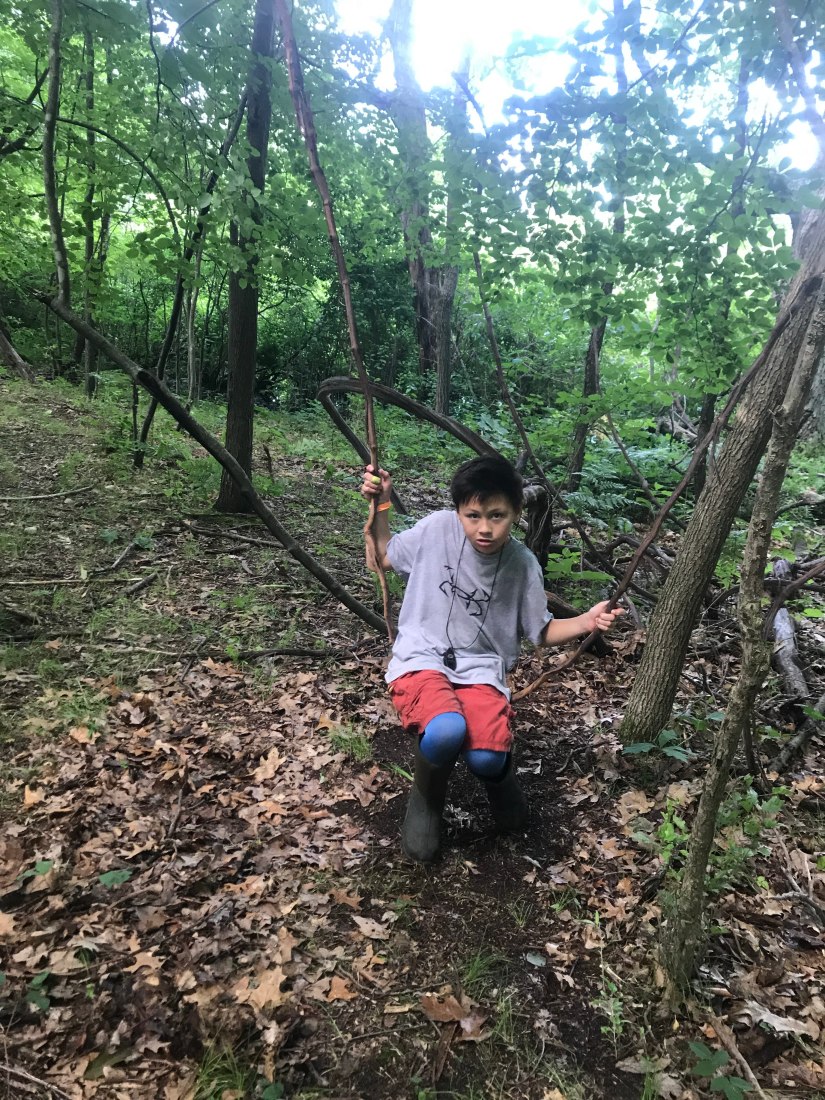 L. is very interested in this deer skull that has been near the Watching Log for several years now.  We looked at its loose teeth, the place where its brain used to be, and estimated where its nose was. 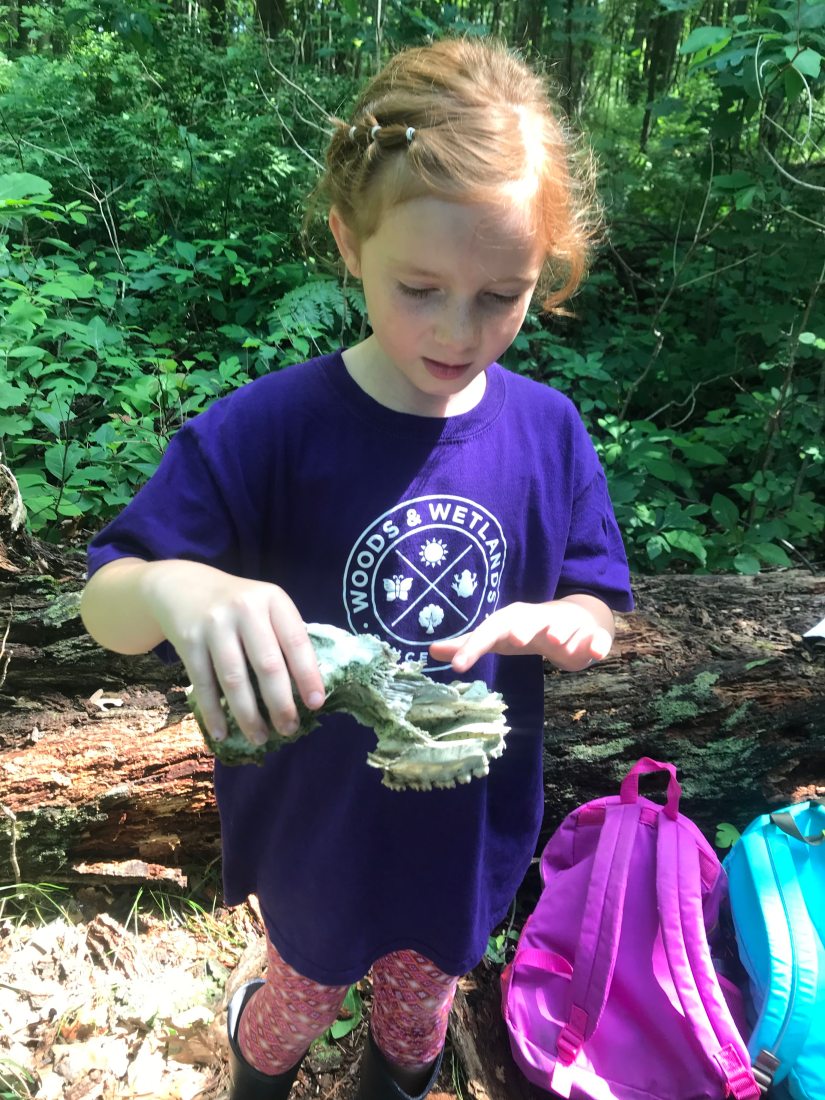 It is hard to believe this tall kiddo was once one of my first graders! 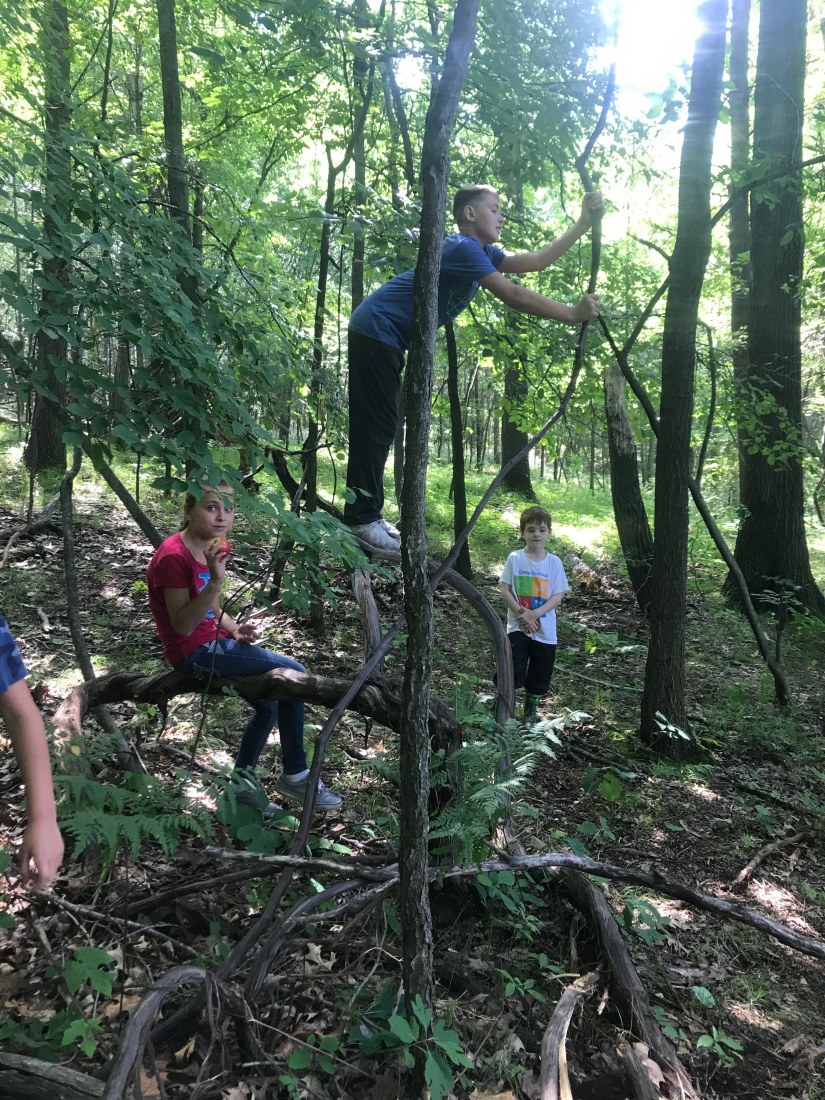 Brand new fungi on the Watching Log.  They were so white they glowed!

I offered the challenge of trying to make bird nests.  It was neat to see what kids came up with, using the materials the woods and wetland had to offer.  They also used whatever background knowledge they already had of nests.  We shared ideas, of course, and soon everyone was using similar things but our nests and methods were unique, just as different species of birds’ nests are also unique to that species!

The nest below was wedged nicely in between tree trunks that grew close together.  E. used moss, ferns, and bark for hers.

Below is my nest, pre-muck layer.  I have the advantage of having learned how to braid.  I have noticed that on several occasions the boys have wished they knew how to braid so they, too, could make ropes out of grapevine bark or nests out of grass.  They are realizing that braiding is not just for girls’ hair!  I may add braiding to the skills I offer in Woods and Wetlands.

B. carefully forms his nest walls with muck from the swamp.  I love that he got his hands dirty and took his time, enjoying the process of creating.  This was definitely one of those, “process over product,” experiences that I love best because the kids don’t have to fulfill any particular task other than just working with their hands and having fun.  It doesn’t matter how it looks in the end and it won’t even go home with them.  I hope the memories last because they made it themselves with no right or wrong and they looked at it through their own eyes rather than a camera/phone lens.  (Meanwhile, I use the camera phone lens in order to share it with you…) 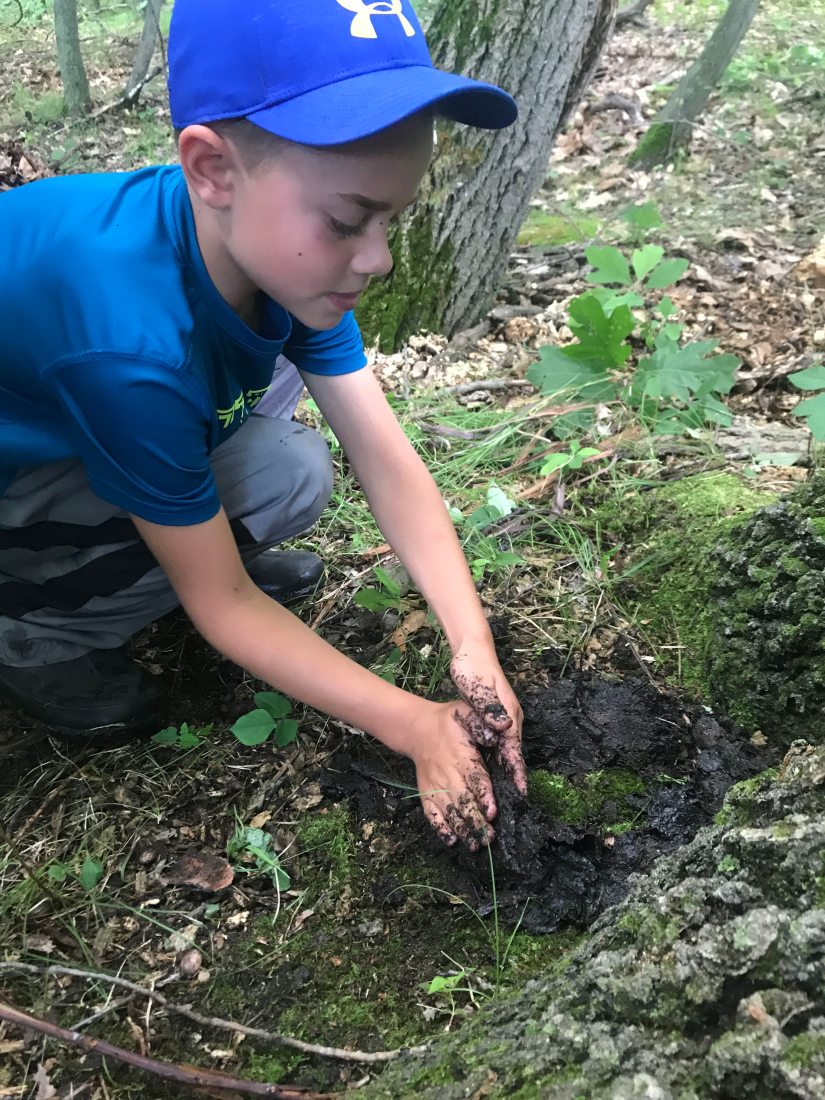 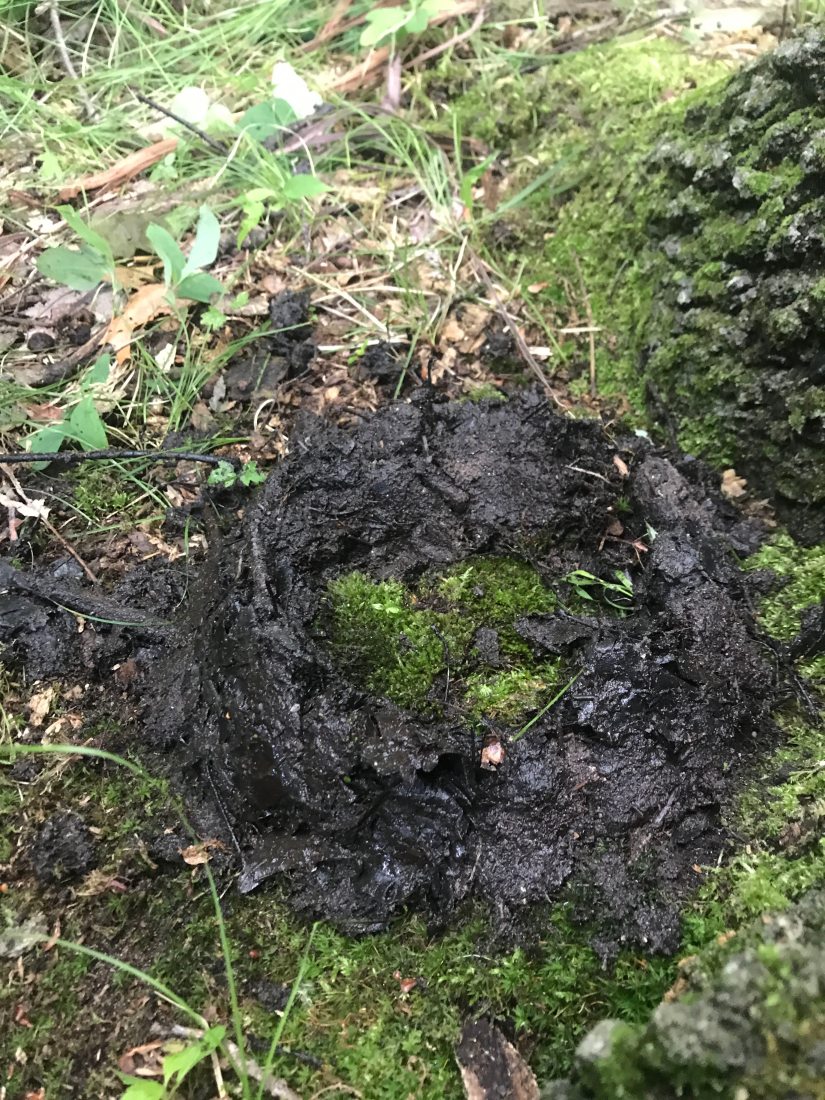 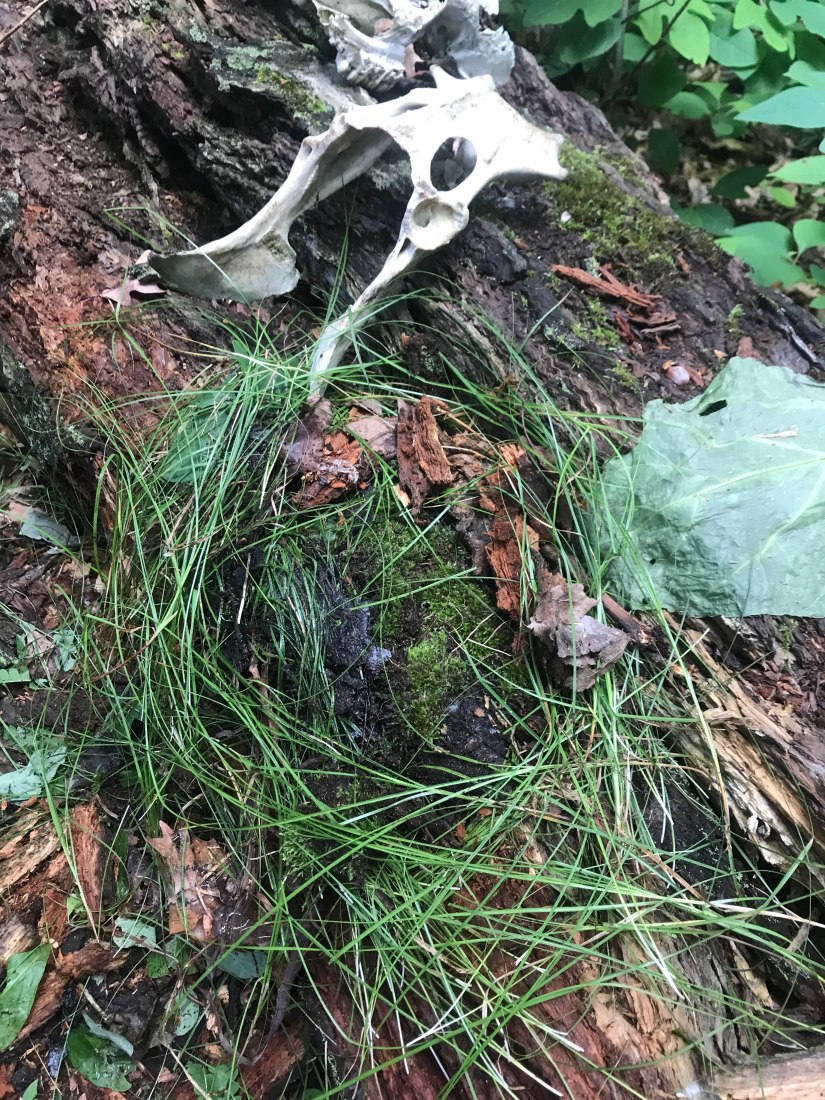 I. put rocks in as pretend penguin eggs.  Hoping to trick a penguin who might happen by… 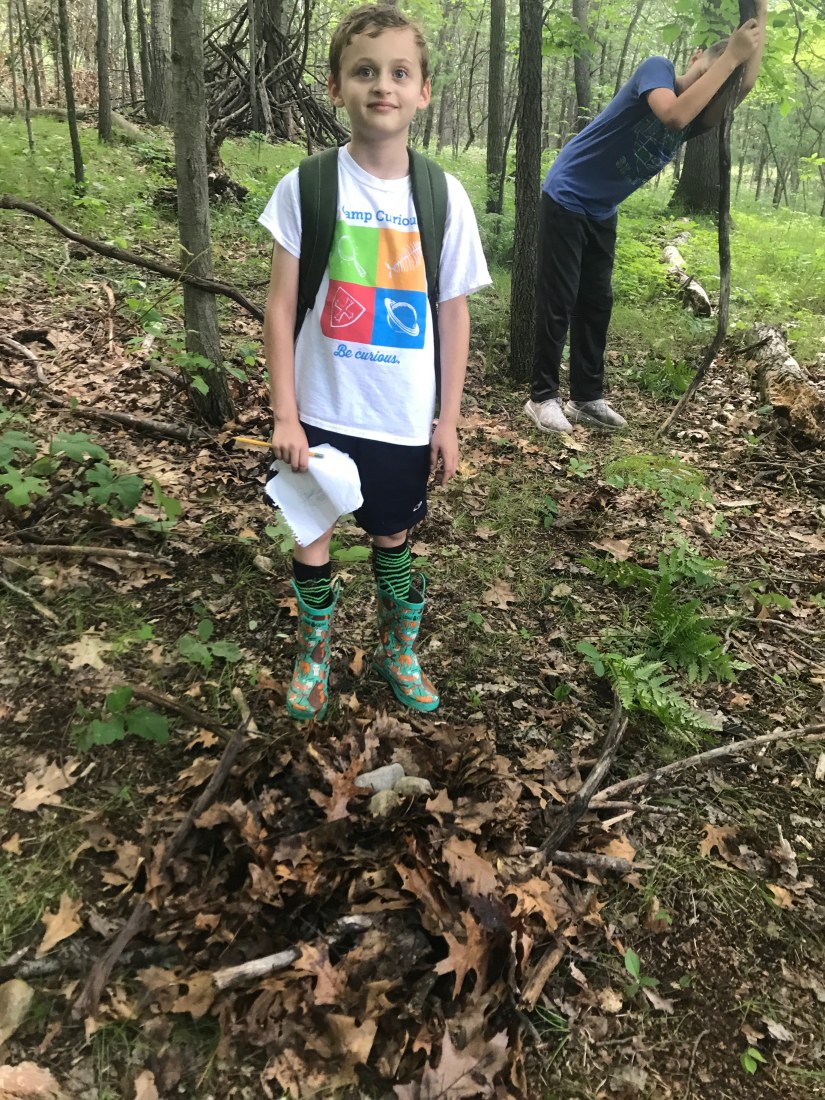 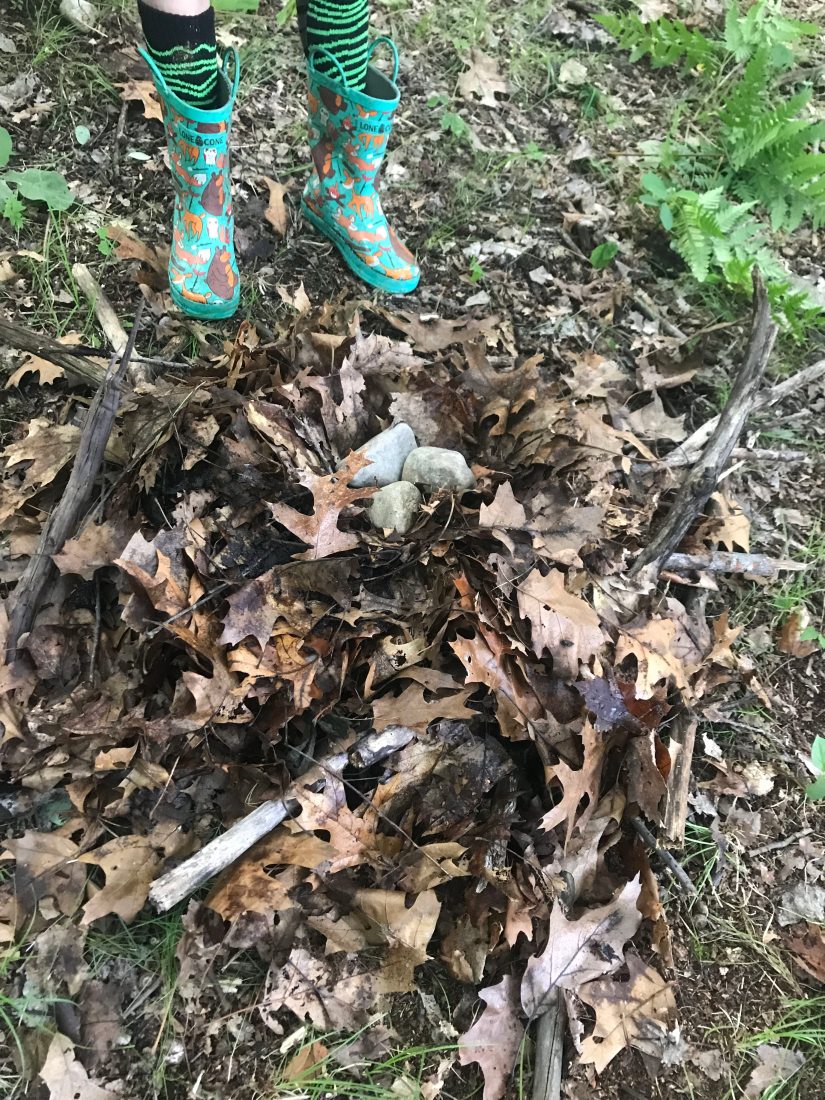 This was a wonderful group of naturalists!  They cooperated, looked out for each other, demonstrated empathy, supported each other’s creativity, and took risks to learn new things.  I hope they all continue to spend time outdoors every day all year round!