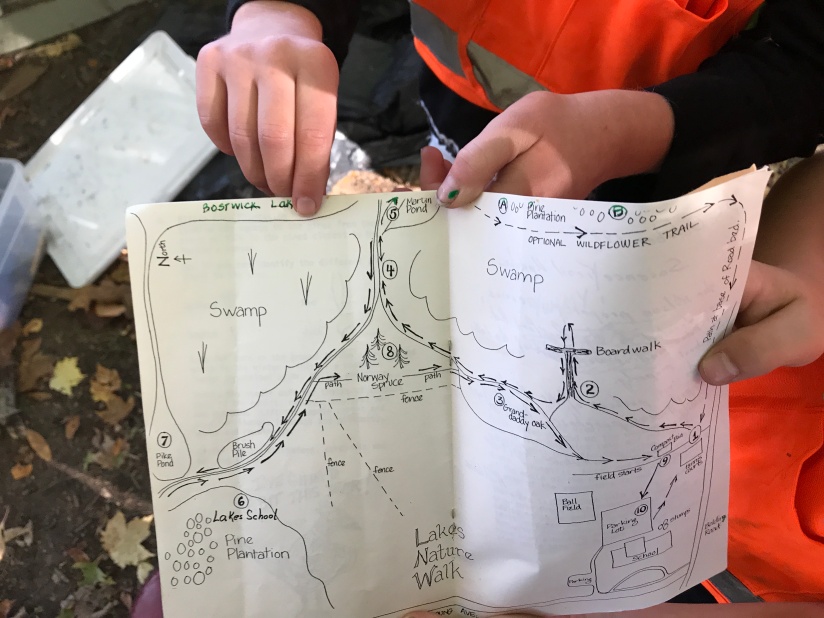 We did it.  That old map I’ve previously written about?  For the first time ever we followed what used to be the trail that circled the entire swamp, returning to our Meeting Circle.  It wasn’t easy and, frankly, wasn’t always entirely enjoyable, but it was an adventure!

At one point I became uncomfortably aware that I was leading an expedition not unlike some of the wild goose chases on which my dad used to take our family when I was younger… the sort of, “hikes,” that were punctuated by a lot of complaining, whining, agonizing over when we’d be there, and even crying, (mostly on my part, as I recall.)  But these kids didn’t cry, not once.  They remained stoic and engaged, even when boots were soaked through or filled with cold swamp water, despite the occasional trip-and-fall, random thorns, and tired leg muscles.  (And all the while, the songs of the spring peepers kept us company!)

In fact, I wasn’t even the one doing the leading.  E. took the lead as the oldest of the kids and she did so with great confidence.  I don’t know if I can properly express my pride and affection as I now reflect on all that went into our expedition that day.  The faith and trust the kids put in me and themselves as we left the trail and went wading through and around cattails, fallen trees, bushes and deepening muck… it fills my heart and brings a smile.  I am visualizing little S. as she gamely struggled along, chattering most of the way, rarely asking me or anyone to help her.  Her former default to learned helplessness is disappearing. Even with her boots soaked, (as we cross between needing to be warm to needing to be waterproof,) and her legs shorter than everyone else’s, she kept a smile on her face every time I checked on her.  I was so proud.

O. was quickly saturated before we even left the trail, and though she exclaimed about being wet, she plowed on through the difficult terrain and I gently teased her about not being able to get any wetter.  (Later, even in the parking lot, she jumped up and down in a puddle…) Her sense of humor kept her together when she was probably pretty uncomfortable by the end of the hike.  We agreed that we wouldn’t do this particular route again and that it wasn’t as fun as getting to just wander in one area with the option of sitting down and resting on a log or standing still to look around.  We had to keep moving or we would never make it back in time for parent pick-up time. And, as I have recently promised myself to do whatever I can to avoid rushing, hurrying, and that awful sense of not enough time, I was in full sympathy with her (and others’) need to stop and to take our time.

But we did it.  They began the session with great curiosity about the old map, where the trail led, and whether we could get all the way around as it indicated.  Now we know. As we picked up a deer trail through the swamp, spotted the Fairy Tree, and finally neared the familiar woods, “LAND, HO!” shouted D., one explorer expressed regret that we had done that hike.  But I pointed out that if we hadn’t done it we would have always wondered if we could, if the old path remained, and now we knew it did not. Now we could spend our time doing what we know we love.  Next week I predict we will wander the (Forgotten Forest?  Hidden Forest? … it needs a name) which has charms and adventures enough to satisfy all explorers, minus the exhausting hike.

At the end I told all of the kids how proud I hoped they were of themselves.  They worked hard, didn’t give up, and stayed together.  They looked out for each other and tried something new.  It was an unknown, physical challenge, not one that just anyone would take on. I couldn’t fully express all that I felt and thought when I looked at their muddy, bedraggled selves, but I hope they felt something good and strong inside.  They earned it.

All of this week’s photos were taken prior to the hike due to the difficulty of terrain and need for both of my hands free.  I am also having difficulty uploading photos at this time.

Regarding the week prior, I learned that the tiny, shrimp-like thing we found in the swamp is called a, “fairy shrimp,” and that they are common in swamps and vernal ponds this time of year.  They are necessary food for many other creatures just waking up and hatching each spring.