The Thursday before last I got to enjoy a new group of Woods and Wetlanders.  We explored freely on a 50 degree, partly sunny afternoon.  Some of the kids had previously been in my original group of Firsts in the Forest, so they knew the land well.  A couple were veteran Woods and Wetlanders from our other site, and still others were brand new to the whole thing, even coming over from other elementaries in the district.  I love how accepting kids are capable of being.  There is always someone who casually invites the newcomers to explore with them.  Sometimes kids would rather be near me, watching and learning from quiet observation rather than instant participation.  Both are valid ways to get comfortable.  Some children are just prefer to be with an adult.  In Woods and Wetlands we accept everyone!

I was so thankful to have E’s grandma, “Ga,” join us so that we could spread out farther, allowing more exploration and discovery.  She is also an experienced helper from 2 years in a row of Firsts in the Forest, so she knew exactly what to expect and how to roll with what we do.

Normally when I begin a new W&W group I like to teach about landmarks, followed the next week by reviewing landmarks and adding something new such as how to use a compass or read a trail map.  My mini lessons usually include tree identification by leaf as well as poison ivy recognition and other nature study topics. With a mixed group, it is more difficult because many of the kids already have experienced these lessons with me.  Additionally, in the past these lessons were taught during the summer after school was out, but now they are directly after a long school day.  This means that the kids have sat still and listened for long enough and need to move, talk, and be free to learn outside on their own terms.  I will continue to insert formal instruction where and when it fits, but this new, “class,” will just have to evolve as we go along.  For now I will try to be there to guide and stimulate their learning as they share discoveries with me.  Yet even if they experience no formal nature study, I am watching them learn valuable things every moment they are out there.

At the Secret Fort:  About half of the kids wanted to come climb in the Secret Fort, so I accompanied them and I happily climbed up into the tree via grapevine.  One boy exclaimed with surprise, “Mrs. H!  I didn’t know you climbed trees too!”  I laughed and pointed out that of course I climb trees!  Climbing trees is one of my favorite activities!  I watched all of the kids search for a way up into the tree and vine that would work for them.  Some saw options immediately and went for it, leading the way for others who watched to see how it might be done.  A few had to wait a while until there was room to climb.  Two boys crowded too close on a branch and had to solve the problem of one stepping on the other’s hand.  I got down so that more kids could climb up.  A few of the kids gave helpful guidance to those who seemed timid.  And there are always one or two who get as high up as possible and then wonder how they will get down.  But they always do.

What they did:  Climbed a tree and grapevine.

What I saw:  Kids getting a chance to be leaders.  Kids learning from other kids.  Verbal communication to solve problems.  Compassion for others.  Noticing others and showing empathy.  Balance practice.  Strength building.  Character development.  Spatial awareness.  Self confidence.  Trust in self and others. 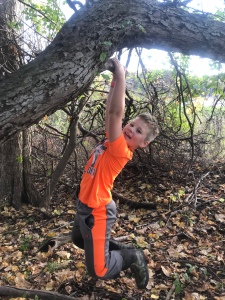 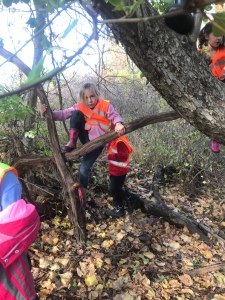 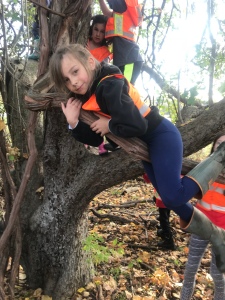 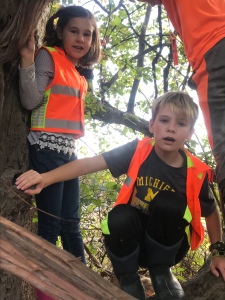 In the swamp:  An enthusiastic group of explorers set out to make a path through the swamp from the Fairy Tree to the Boardwalk.  This was no easy feat and about half of the kids turned back.  I continued on with a few intrepid and determined boys.  We quickly discovered we needed to keep our hands up out of the cattails to avoid what felt like paper cuts from the drying reeds.  We developed a method of stepping ahead to flatten our path before our faces and hands encountered all of the plants in our way.  It wasn’t particularly boggy, but it still took a long time and we paused to consider going back several times.  The cattail reeds were still well above my head so we had effectively disappeared from anyone else’s sight.  We began to get the feeling we should be seeing the Boardwalk soon but it wasn’t where we expected to see it.  Finally I spotted the railings off to our left quite a ways from where I had anticipated.  We all agreed that our sense of distance had been confused and we were surprised by that.  We joked with the rest of the class when we reunited with them that we had been lost for a year and had nearly died from our risk-laden adventure!  By that time it was time to get ready to go back to the real world and everyone was nicely tired.

What they did:  Waded through tall cattails in a swamp from one place to another in about 15-20 minutes.

What I saw:  Kids getting to have a real adventure that wasn’t on a screen happening to someone else.  Kids developing problem solving techniques for doing something they had never done before.  Growth of self-confidence.  Focus on a task at hand.  Bravery and courage for exploration and risk.  Developing a new perspective.  Teamwork.  Physical strength and endurance.  Mastery of fear and minor injuries, i.e. bleeding a bit from a cut but brushing it off and saying, “I’m okay.”  Making memories.  Working toward developing a sense of direction. 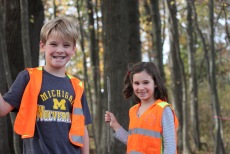 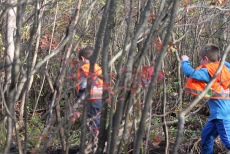