In the two weeks since our last class the ferns in the swamp have turned brown and crumbly.  Some of the kids have now watched the entire (most visible) life cycle of the fern from the days in early spring when snow still lay in patches and the ferns slowly pushed up their curled fiddle-heads all the way to now as the feathery fronds die back again.  Nature has a beautiful way of demonstrating how every living thing dies at some point, yet most live again in some way, shape, or form.  Perhaps that is why spring and fall evoke such strong feelings in humans.

We were lucky enough to have a parent volunteer this time and she was able to go with groups to visit the secret fort, the swamp, and the boardwalk and wild apple tree.  The kids demonstrated their independence but also their kindness and empathy toward each other as one or another got tiny bumps or scrapes and they stopped to check on each other.

A group of about half the kids and I visited the, “Fairy Tree,” which is the tallest white pine tree in the swamp, making it an excellent landmark.  This precipitated a mini lesson and discussion of what landmarks are and how to use them.  Several children had already learned about landmarks in an earlier W&W class, but there were a few who were new to the concept and J. was very interested in looking for more of these guide-posts.  He picked it up right away and noticed several other unusual sights that could help us recognize our surroundings.

A visit to the Secret Fort took some of us through a narrow, winding path beneath vines and branches where we had to all duck down as small as possible.  This route lends a feeling of being a small animal creeping through the underbrush and it even passes an animal den dug deep into the hillside.  The den does not appear to have been used in some time, but it is fun to peer in and imagine what might live there.  Part of Woods and Wetlands is learning what kinds of animals could potentially live there, since many people don’t know what wild creatures are native to our own backyards and surrounding areas.  If I had to guess at this particular den, I would guess a fox or a woodchuck once called it home.

At the fort we all climbed up into the old tree by means of the gigantic, twisted grape-vine or directly up the nubbly branches and trunk of the tree itself.  Cars flash past outside of our fort but they cannot see us with the exception of just bright flashes of those who are wearing the neon orange vests we have for safety use.  It is a cozy feeling to be all tucked up into the curve of a tree branch with legs swinging free and the changing colors and smells of leaves all around. 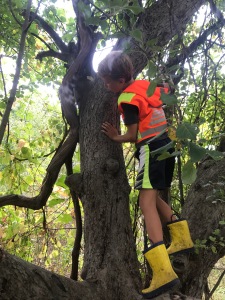 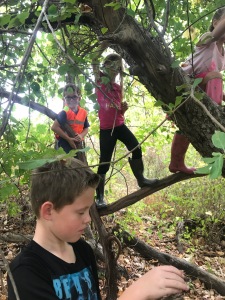 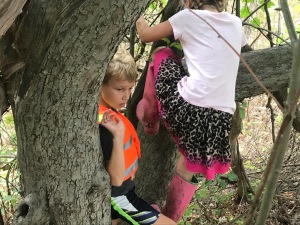 J. noticed on the path to the boardwalk that some of the trees made good landmarks in that area because the bark, “looks like an armadillo!”  I took a closer look and saw what he meant; the bark was scaly and unusual.  He is a good nature detective to notice details like that!

When we visited the boardwalk some of us stopped at the wild apple tree and spent quite a long time working at releasing wild apples for everyone to taste.  Despite their discoloration, scabs, and occasional holes, they are safe to eat and there are portions that are clear for biting into.  Kids love to be able to forage for their own snacks in nature and this apple tree kept them busy for a while!  E. climbed up and knocked down apples for other children, catching some in her own hands and then tossing them to open hands below.  I loved watching the upturned faces alight with anticipation and then satisfaction as they spotted apples that were then delivered to them.  J. climbed up as well with a long stick and was able to shake and knock down some of the larger apples from far over our heads and he shared these with the smaller kids on the ground.  It’s fun to see the teamwork and kindness between them.

E. and some others recognized poison ivy in some areas we hadn’t noticed it before.  I was impressed that they identified it without any help this time!  Next, I’d like more of the kids to be able to notice what sort of branches and vines they grab before they poke themselves on brambles and other spiny plants.  But in this case there is nothing like a natural consequence to teach this lesson better than I ever could! 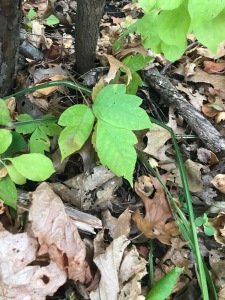 Back at our base area C. and D. gently handled two millipedes, noting that one of them curled up into a perfect spiral when first touched, while the other flowed around on their hands without curling up at all.  We examined their many, tiny legs and noticed how smoothly their bodies move and flow much like a train, without any side to side movement or legs sticking out to the side as other bugs might.  It is interesting and satisfying to simply observe small creatures like this and wonder about them. 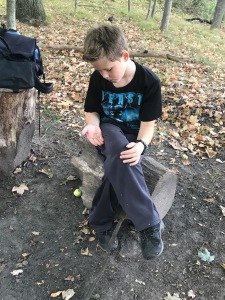 Toward the end of our session there was some movement toward re-building some forts with the large branches that still lie there from last year.  I watched a few kids work together to carry heavy branches and was amazed by D.’s strength as he carried one all by himself! 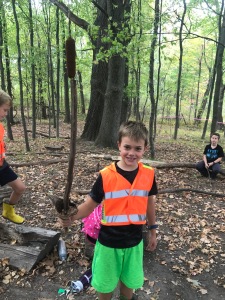 It was another wonderful day in the woods and wetlands of Michigan.  I am so thankful that we have this opportunity to go out there and just Be.